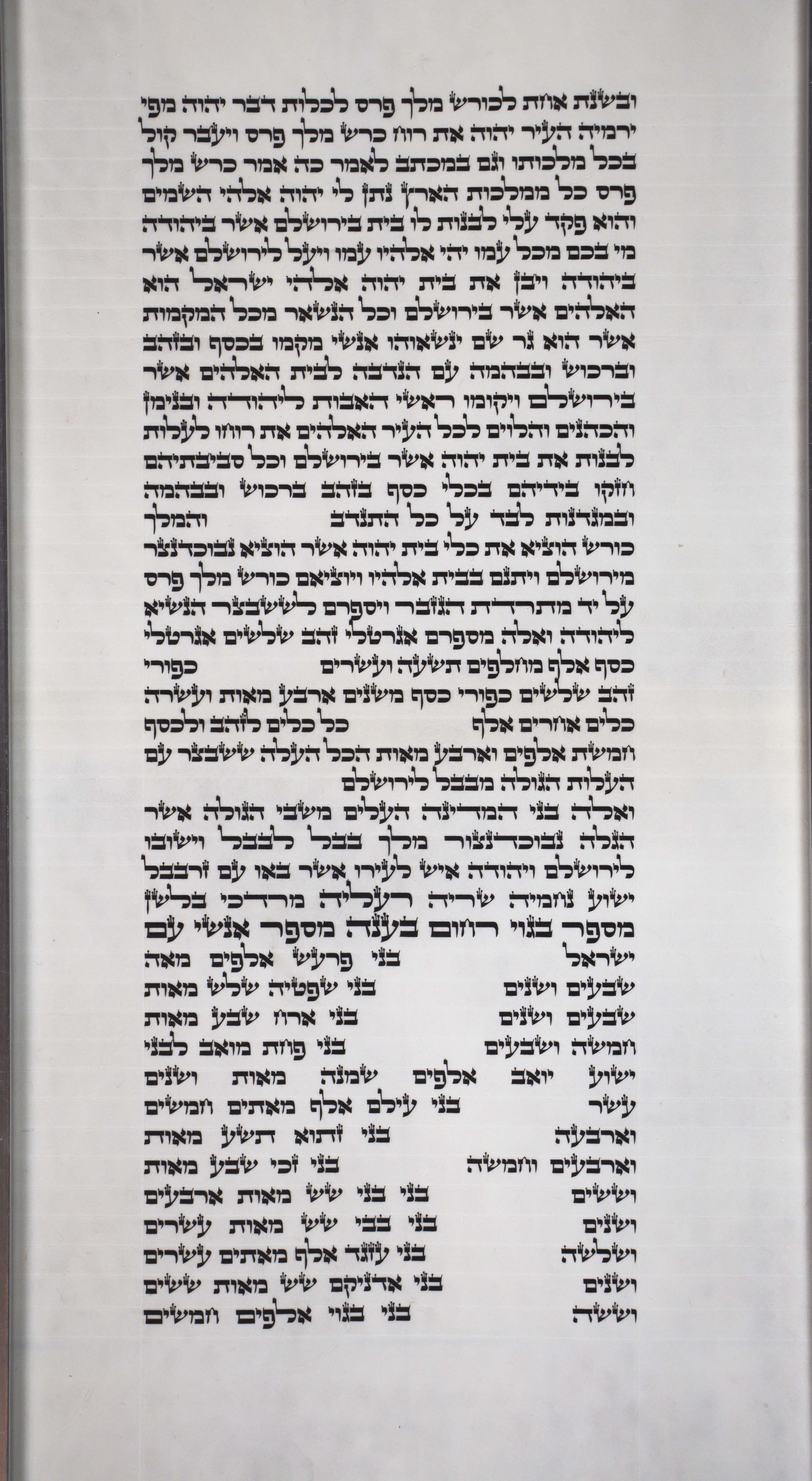 Ezra Chapter 1
1Now in the first year of Cyrus king of Persia, that the word of the LORD by the mouth of Jeremiah might be fulfilled, the LORD stirred up the spirit of Cyrus king of Persia, that he made a proclamation throughout all his kingdom, and put it also in writing, saying, 2Thus saith Cyrus king of Persia, The LORD God of heaven hath given me all the kingdoms of the earth; and he hath charged me to build him an house at Jerusalem, which is in Judah. 3Who is there among you of all his people? his God be with him, and let him go up to Jerusalem, which is in Judah, and build the house of the LORD God of Israel, (he is the God,) which is in Jerusalem. 4And whosoever remaineth in any place where he sojourneth, let the men of his place help him with silver, and with gold, and with goods, and with beasts, beside the freewill offering for the house of God that is in Jerusalem.
5Then rose up the chief of the fathers of Judah and Benjamin, and the priests, and the Levites, with all them whose spirit God had raised, to go up to build the house of the LORD which is in Jerusalem. 6And all they that were about them strengthened their hands with vessels of silver, with gold, with goods, and with beasts, and with precious things, beside all that was willingly offered. 7Also Cyrus the king brought forth the vessels of the house of the LORD, which Nebuchadnezzar had brought forth out of Jerusalem, and had put them in the house of his gods; 8Even those did Cyrus king of Persia bring forth by the hand of Mithredath the treasurer, and numbered them unto Sheshbazzar, the prince of Judah. 9And this is the number of them: thirty chargers of gold, a thousand chargers of silver, nine and twenty knives, 10Thirty basons of gold, silver basons of a second sort four hundred and ten, and other vessels a thousand. 11All the vessels of gold and of silver were five thousand and four hundred. All these did Sheshbazzar bring up with them of the captivity that were brought up from Babylon unto Jerusalem.
Chapter 2
1Now these are the children of the province that went up out of the captivity, of those which had been carried away, whom Nebuchadnezzar the king of Babylon had carried away unto Babylon, and came again unto Jerusalem and Judah, every one unto his city; 2Which came with Zerubbabel: Jeshua, Nehemiah, Seraiah, Reelaiah, Mordecai, Bilshan, Mispar, Bigvai, Rehum, Baanah. The number of the men of the people of Israel: 3The children of Parosh, two thousand an hundred seventy and two. 4The children of Shephatiah, three hundred seventy and two. 5The children of Arah, seven hundred seventy and five. 6The children of Pahathmoab, of the children of Jeshua and Joab, two thousand eight hundred and twelve. 7The children of Elam, a thousand two hundred fifty and four. 8The children of Zattu, nine hundred forty and five. 9The children of Zaccai, seven hundred and threescore. 10The children of Bani, six hundred forty and two. 11The children of Bebai, six hundred twenty and three. 12The children of Azgad, a thousand two hundred twenty and two. 13The children of Adonikam, six hundred sixty and six. 14The children of Bigvai, two thousand fifty and six.