(Note: Hebrew is written from right to left to right.)
In English His name is pronounced either Jehovah or Yahweh.

Since English is read from right to left we see the letters as:
hwhy

We have all heard it is forbidden among the Jews to say God’s name. According to Halakha law that isn’t exactly the case if it is said that the Bible forbids the use of Ha Shem, The Name. There are many instances in the Torah where The Name is said, for instance in Ruth 2:4: “And, behold, Boaz came from Bethlehem, and said unto the reapers, YHWH [be] with you. And they answered him, YHWH bless thee”.

The following photograph if from the Scroll of Ruth at our Scriptorium. The yad, pointer is locating Ruth 2:4 the word “and behold”.

hwhy Jehovah is used twice in this short conversation.

Halakha law in essence says “Halakha requires that secondary rules be placed around the primary law, to reduce the chance that the main law will be broken.”

When it comes to writing the name of God, according to Halakha law, it must be abbreviated if there is a chance that the article where the name is written will be deleted, destroyed, scratched or defaced or accidentally done so by one who does not know better. With the exception of the latest law where it may be written on computer providing the article will not be printed.

This is why we see the name of G-D written incomplete. We have been taught that this probation is in accordance with one of 10 Commandments where it says:

This is not the Law most people believe is being broken by saying God’s name.

This is not the case according to Halakha. The law states that the reason for the protection of the name is in reference to verses in Deuteronomy 12:3, 4 And ye shall overthrow their altars, and break their pillars, and burn their groves with fire; and ye shall hew down the graven images of their gods, and destroy the names of them out of that place. Ye shall not do so unto the LORD your God.

It is said, “If there is a chance an article will be destroyed that contains HaShem, the name of God, the name must be abbreviated,” usually simply by using the Hebrew letter h with an apostrophe on the left side of the letter as seen in this picture of the Parochet with the verse Isaiah 2:3 and Micah 4:2 “for out of Zion shall go forth the law, and the word of the LORD from Jerusalem. LORD is abbreviated with a h. Parochets are usually thrown away when replaced with new ones.

When a Sofer (scribe) is writing the Sefer Torah he must prepare himself mentally to sanctify the name of G-D. Once he starts writing the name he may not stop until it is finished and if he makes a mistake he may not change what he has written. One of two things can happen at this point. According to some Soferim, he may take a very sharp object and cut out that piece of skin, glue a new piece on the back side of the sheet and re-write the name. There is quite a bit of argument with this procedure though. The most common thing he may do is take the entire sheet to the geniza and never use it. If he makes this mistake near the end of the sheet, he will have lost a weeks’ work. They really are careful here. A novice Sofer alweays starts with the Scroll of Esther. This Scroll does not contain the name of GOD and therefore the Sofer will not loose all his work if he makes a mistake on the Name.

Much can be said about the attention to detail and the consuming effort a Sofer has to write a Hebrew Scroll without error. Most people would not understand why this is important, but just think about copying the 304,805 letters of the Torah and having the same letters Moses used 3,500 years ago. This is a monumental task. When it comes to writing God’s name the pressure increases. At the point of writing HaShem, The Name, the Scribe or Sofer will want to be sure he is ritualistic clean by using the Mikvah.

The laws concerning a kosher mikvah is not necessary to discuss here. Briefly a mikvah a body of water deep enough for an average size adult to immerse or be covered with water. The purpose of the mikvah or immersion in water is not for cleanliness of the body, but a ceremonial picture for spiritual cleanliness. This is also not the time to teach the doctrine of immersion in the Old Testament, but to show what the Jewish people do to consider themselves spiritually clean to write the Torah or other articles of STaM (Scrolls, Tfillin, and Mezuzah). 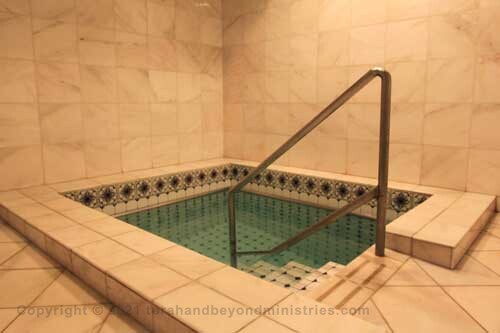 In the Western world, if a person was to happen upon a mikvah it might be thought to be a large spa or, because it was located near a religious organization, one might think it was a large baptism pool. To the untrained eye if a mikvah was found in a dig in ancient Israel, it would look like a large bathtub.

A respected General and archaeologist, Moshe Bronstein, recently said “in 2004 the largest mikvah ever built was discovered 264 meters (1825 feet) south west of the Temple Mount”. We had the privileged of excavation part of the pool in 2005.

This mikvah is known as the Pool of Silwan. The New Testament name is the Pool of Siloam. In 2005 Moshe Bronstein’s team discovered Hezekiah’s tunnel that fed the pool. They opened the tunnel which leads to the spring of Gihon, and for the first time in 2,000 years water flowed into the pool of Siloam. According to Moshe Bronstein, Israeli General and archaeologist, this huge pool, much larger than a football field, was used by hundreds of thousands of Jews who came to Jerusalem for the three feasts. They all wanted to go to the Temple mount, but first had to visit a Mikvah. This Mikvah was the Pool of Siloam. At the north east corner of this pool, the steps of ascension were found in 2006. Jewish families by the hundreds of thousands would come to Jerusalem for Passover, Yom Kippur, go to the Mikvah and climb the steps of ascension. While walking up to the Temple they would be singing the psalms of ascension, Psalm 125-129. The pool of Siloam was open day and night during the feasts.

Now back to the actual writing of HaShem, (The Name). 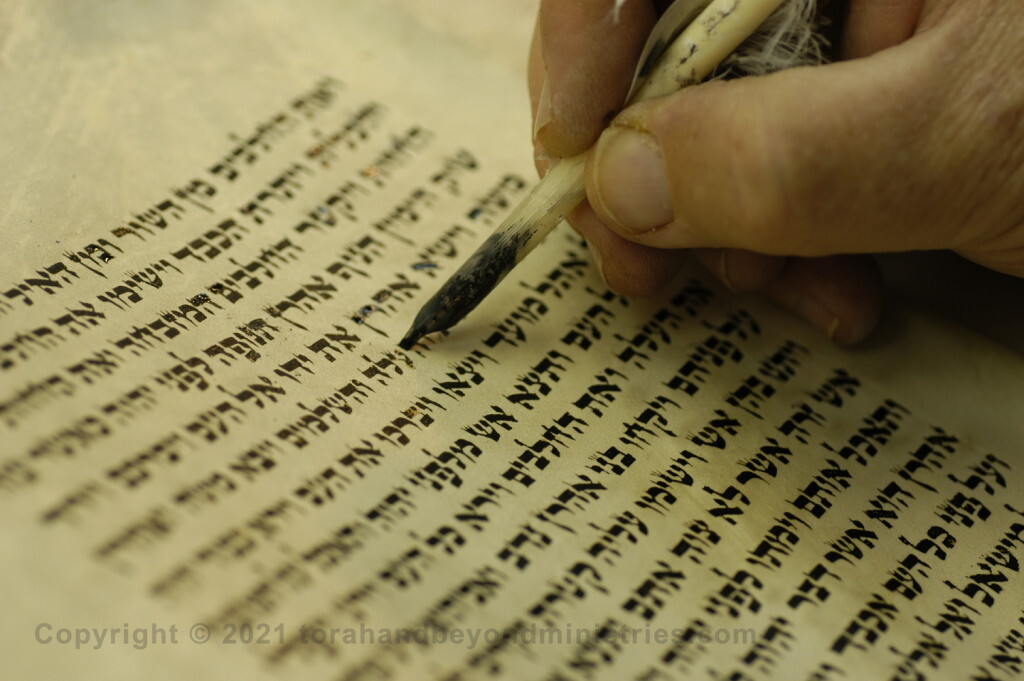 There are arguments as to what must take place at the time of the writing. I have heard the following arguments for the last 40 years. “When a scribe is preparing to write the name of GOD, he will go to the Mikvah, ceremoniously cleanse himself, come back to the scriptorium, choose a new quill, and write the Name. Think about this for a minute. The word LORD is used 1,606 times in the Torah and there are times where HaShem is used almost 100 times on one sheet. It takes a week to write a sheet, so this sofer would really be wrinkled going to the Mikvah 20 or more times a day. Perhaps some “really” devout Sofer did this in the past.

Another way Soferim say they write HaShem is to start the day as usual by going to the Mikvah and then every time HaShem needs to be written, they leave a blank space. The next day after going to the Mikvah, the sofer simply fills in the blanks; he is clean and has a new quill. Still there are arguments for and against this.

My conclusion is this: when I hung sheets of my first Torah on the walls of my office in 1999 and invited Dr. James Price, my Hebrew teacher, to come view them. He was particularly interested in the way HaShem (The Name) was written. As we looked carefully at the scroll we noticed the ink consistency of the line containing God’s name and concluded that the sofer just kept on writing. If he had changed anything at the point of HaShem, the ink would have been much darker at that point. Some instances at the point of HaShem the ink was becoming lighter than the preceding words. Look at the ink consistency in the photo below. I have found out this is the way many Sofers write The Name, with one exception; they slow down while writing it. They are already writing at the average speed of 3 letters per minute, and now they are really careful. Before writing The Name, the following is quoted in Hebrew. “I am writing the name to sanctify the name.” If you check your Torah, you will have to come to your own conclusion as to how the Sofer worked.