K”nt TaNaKh is an acronym for the Hebrew consonants that stand for the three classifications of writings in the Hebrew Bible (Old Testament).

Two vowels are added to make the acronym pronounceable.

The full set which makes up the Tanakh, the Hebrew Bible (the Old Testament)

When we received the scroll of Isaiah and the scroll of Esther from Machon OT in 2004 we realized that perhaps all the scrolls that make up the Old Testament could be located. 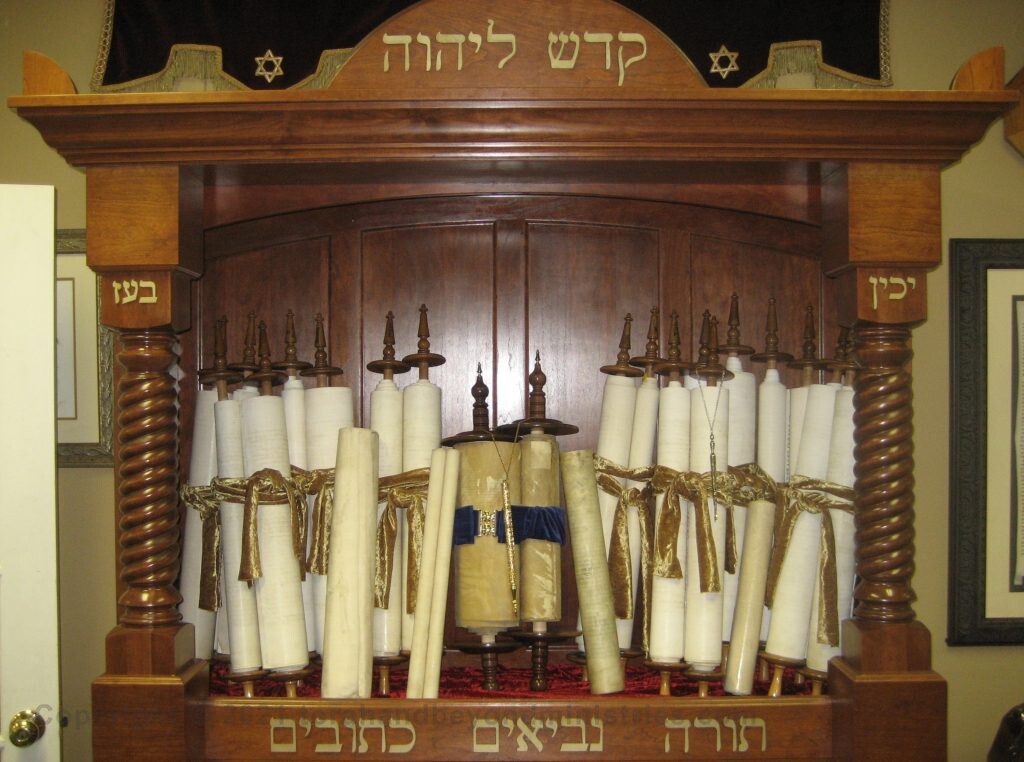 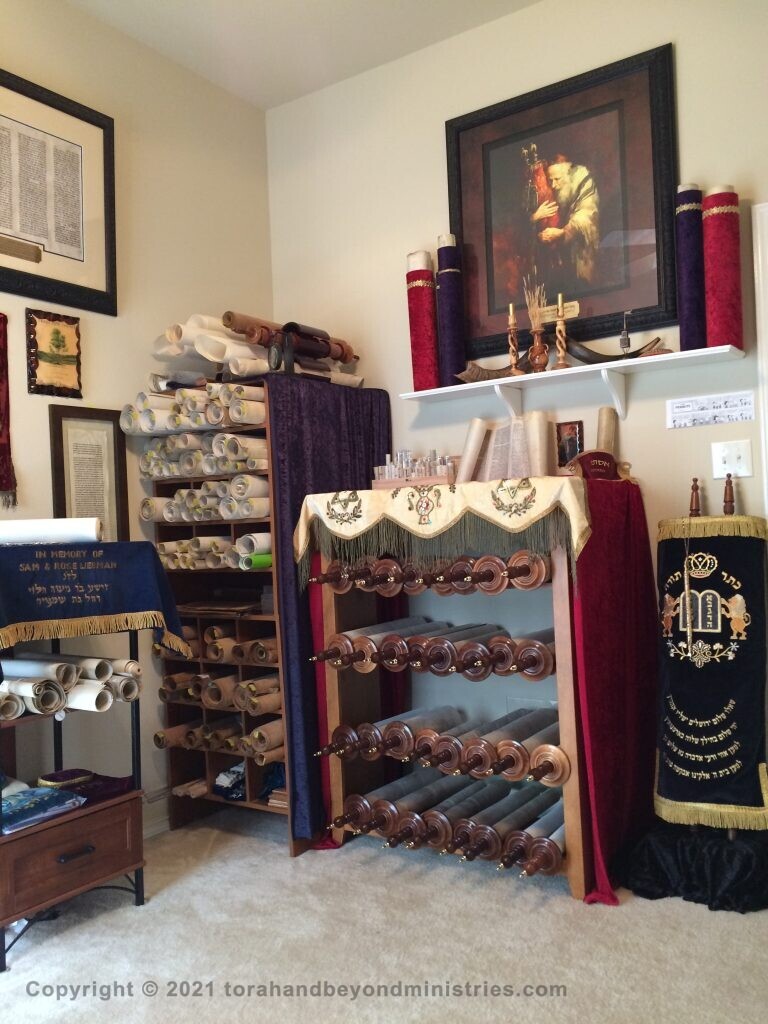 The average person and many professionals who work with Hebrew scrolls are not able to purchase more than a Sefer Torah and perhaps the scroll of Esther. These are the two most common scrolls which every synagogue will have. Very few synagogues possess scrolls like Isaiah, Jeremiah, Samuel etc. From our research and from the people we purchased scrolls from we have come to the conclusion that the following is typically what happens with scroll ownership. All synagogues must have a Sefer Torah. Usually only the most orthodox, would even want a scroll such as Samuel, Isaiah, or Jeremiah. In very large Jewish communities sometimes one synagogue or a Tzadik, a righteous person, will have the Neviim (Prophets) and a few of the Ketuvim (Writings) and rent them to whoever needs a particular scroll.

The following is a list of the 16 scrolls that make up the Tanakh. Several Old Testament books are found on some Scrolls.

The following photograph is of the complete Tanakh, Old Testament. These Scrolls date from the 16th century to 1965. They were written on sheep skin, goat skin, and vellum in Lithuania, Poland, Israel, Morocco, Germany. Most of the Scrolls survived the Holocaust and had been removed from the wooden rollers called Etz Chaym, Tree of Life. We had new premium grade walnut Etz Chaym made for each Scroll.

This display was set up in Texas.

The Torah contains five books; Genesis through Deuteronomy. The Sofer writes 1 & 2 Kings on one scroll and 1 & 2 Samuel on one scroll. Usually the scrolls do not even show an indication you are changing from first to second Kings or first to second Samuel. The lines just run together from one book to the other. However some of the scrolls of Kings we have seen do show an indication you are going from first Kings to second Kings by skipping the customary two lines between books. Recently we have acquired very unusual scrolls of Kings where first Kings is on one scroll and second Kings is on the other. The same format was used for the scroll of Samuel.

The following photograph is a set of Hebrew Scrolls that were all written in Poland around the turn of the 19th century. These Scrolls are on original Etz Chaym and were almost kosher. To be kosher every letter must be complete and dark black.

The Twelve Prophets, Gentiles call them the Minor Prophets, are all on one scroll called Trei Assar. It would make sense to put several small writings together rather than 12 one page scrolls. The compilation of the 12 could be kept safe from damage much easier.

As with all things relating to the Bible there are always differences of opinion by those who have spent decades on one subject to prove a point. This is one reason I just take the Bible literally and leave the arguing for others. I do not want to dismiss the need for scholars seeking to know the facts, but none of us could spend the time required to search out all the facts about everything. If you want to search out the information about all 12 Minor Prophets having been written on one scroll, you could start with the writings of Philippe Guillaume. I would not use him as the final authority but he has done quite a bit of research.

The books of Song of Songs, Ruth, Lamentations, Ecclesiastes and Esther have been on one scroll for perhaps 2,000 years. The scroll is called the Megillah. There is a joke among people who live in New York City: “Did you get the whole Megillah”, whenever you purchase something. In other words, did you get it all? It seems, when speaking about the scroll called the Megillah the book of Esther is always cut off and you get only four books. I have never seen “the whole Megillah”. Where Esther should be in the scroll, it is missing. After the Torah, the scroll of Esther is the “favorite” scroll in the Jewish community. Everyone wants Esther because it has a happy ending for our friends the Jewish people.

It is rare to see the “whole Megillah”. This one came from Poland and we purchased it in Jerusalem in 2005. However, the Scroll of Esther was missing.

Esther is the scroll an apprentice Sofer usually starts with and then works his way up to the Torah. Esther does not contain any of the names of God, so if a mistake is made by a novice, he can simply scratch the error off the sheet. He cannot do that with the name of God.

This is a picture of a very small scroll of Esther we purchased for our collection a few years ago. It is by far the smallest scroll we have ever seen. From the looks of the scroll, it was not written by a Sofer, but perhaps someone of lesser learning in calligraphy. We would judge the scroll to be one written at home, by someone who knew enough Hebrew to do a fairly good job. The parchment is also of a lesser quality resembling scrolls from Russia. This scroll is at least 100+ years old. Scrolls of Esther are always prized and if possible a religious household would have one of the scrolls.

It took us about eight years to find the first ten scrolls of the Tanakh. They are rare, but we soon found out the remaining six scrolls are very rare. When we tried to find the last six scrolls we hit a wall and could go no further. I asked Machon OT in Jerusalem if they would be able to get the scrolls for us and they said: “You mention some books that we are not written it on parchment at all! Tehilim, Mishley, Eyov, Daniel, Ezra and Nechemia and Divrey Hayamim you can’t find them at all unless you will order it specialy for you. Shalom from Jerusalem, Yischak Steiner.” They said the scrolls had not been written since the 8th century.

We still needed the six scrolls everyone was telling us we would never be able to find. At that point we came up with the idea of writing the major libraries of England and some large Jewish study groups. We wanted to see if what Machon OT had said, could actually be true and these scrolls would never be found. We wrote the following letter to places that should have the scrolls if they were to be found anywhere.

“Dear _______ Do you have pictures of the scrolls of Job, Daniel, Chronicles, Ezra/Nehemiah and Proverbs? I have spent quite a bit of time researching Hebrew Scrolls and can not find if these five scrolls were ever written.
Respectfully, Gary Zimmerman”

To our amazement we started receiving answers to the letter a few days later. The following are copies of the letters we received.

“Dear Mr. Zimmerman
I have no knowledge of any scrolls of these Books. That is not surprising, as Biblical texts, after the 8th or 9th century were written on codexes, and only those books that were read during prayer services were read from scrolls. The Pentateuch and the Book of Esther were always read from scrolls (except for unusual circumstances). The selections from Prophets (haftarot), and the other four scrolls were often read from a codex or printed book, but also from scrolls if they were available, so that these books were copied on scrolls and are still copied on scrolls . Job, Daniel, Chronicles, Ezra/Nehemiah and Proverbs are not read at services so it was not necessary to write them on scrolls
Benjamin Richler Institute of Microfilmed Hebrew Manuscripts”
Jewish National and University Library
POB 39105 Jerusalem, Israel 91390
Tel. 02-6586233 FAX 02-6511771
This group of Jewish scholars have examined over 90% of known Hebrew Manuscripts in the world and have never seen these scrolls. This would be a good web site to visit for further information.
http://jnul.huji.ac.il/imhm/

Another answer to our letter

Another answer to our letter

“Sir, Thank you for this e-mail. In response to your enquiry, please be advised that we do not hold a complete set of scrolls covering the entire Tanakh in our collection. Yours sincerely, Ilana Tahan Hebraica Curator and Head of the Hebrew Section The British Library APAC96 Euston Road London NW1 2DB”

The First One Found – Psalms

The first of the six missing scrolls we found was the Scroll of Psalms. The book is called Tehillim in Hebrew. After all my suppliers told me that there were no scrolls of Tehillim to be found, I pretty much gave up but except for one thing. I thought “someone” must have this scroll. Why wouldn’t some rich Jewish person have it written for the synagogue just because it is a Jewish treasure and they should want to have it written?

One of the Jewish men we purchase scrolls from was going to Israel to buy silver antiques. We asked him to look for the scroll of Psalms while he was there and he said he would try, but did not think there were any.

He wrote me after he had been in Israel a few weeks and said, “I can only find four scrolls of Psalms in the entire country of Israel; one is in the Galilee, one is at the Kotel, a Rabbi in Jerusalem has one and a small Shul in Jerusalem has one. The Shul asked why you don’t have one written.”

I said, we do not just want the Hebrew Scrolls; we want ones that have been used so we can teach the love and care the Jewish community has for the scrolls. He went back to the Shul and told them my words. They answered by saying, “If he will give us the money to have another one written, then he can have ours.” I purchased that scroll which was written in Israel about 40 years ago.

The Scroll of Psalms is held in the picture above by a Messianic Jew named Dan Katz. He is a master wood carver and the man who makes all the Etz Chaim for the Scrolls we purchase. (Note: Since finding this Scroll of Psalms we were asked to help build a collection for Walter Mize of Cleburne, Texas. It was impossible to find this second Scroll of Psalms. We finally commissioned to have Psalms to be produced in Israel.)

After adding Psalms to our collection this left the other five scrolls to have a complete Tanakh in scroll form. My Jewish contact went back to Israel the next year and found a wealthy Jewish family that had the scrolls of Daniel, Job, Proverbs, Ezra/Nehemiah, and Chronicles written for their personal use. They were written in Israel about 20 years ago. When asked if they would sell them to finish our collection, they agreed. The scrolls were shipped from Israel to my office in Texas and I sewed all five scrolls to Atz Chaim, Scroll rollers, in 2008.

The following 16 pictures of the complete TaNaKh are Scrolls The Scriptorium collected from 1999 to 2008. Most of these Scrolls were moved in 2012 for review and possible display at the Bob Jones University Museum in Greenville, South Carolina.

(Note: Let us challenge you to see if you can find any pictures of authentic Hebrew Scrolls of the entire TaNaKh or where they are on public display in any collection either Jewish or Gentile. Please contact us on the comment or feedback page.) 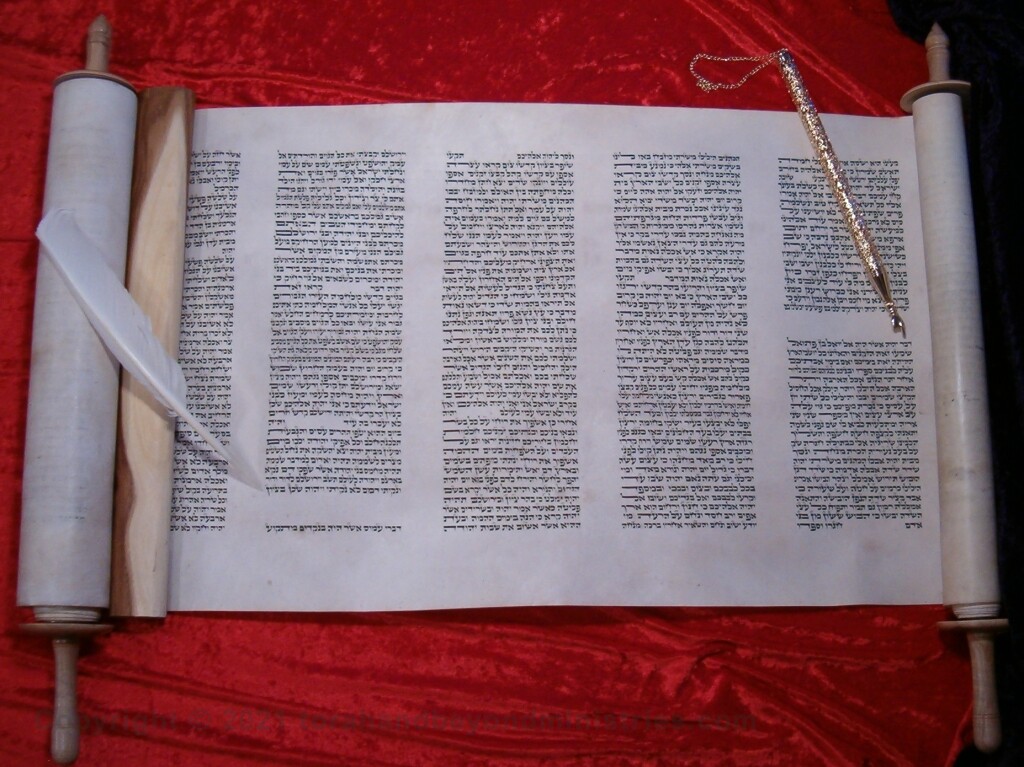 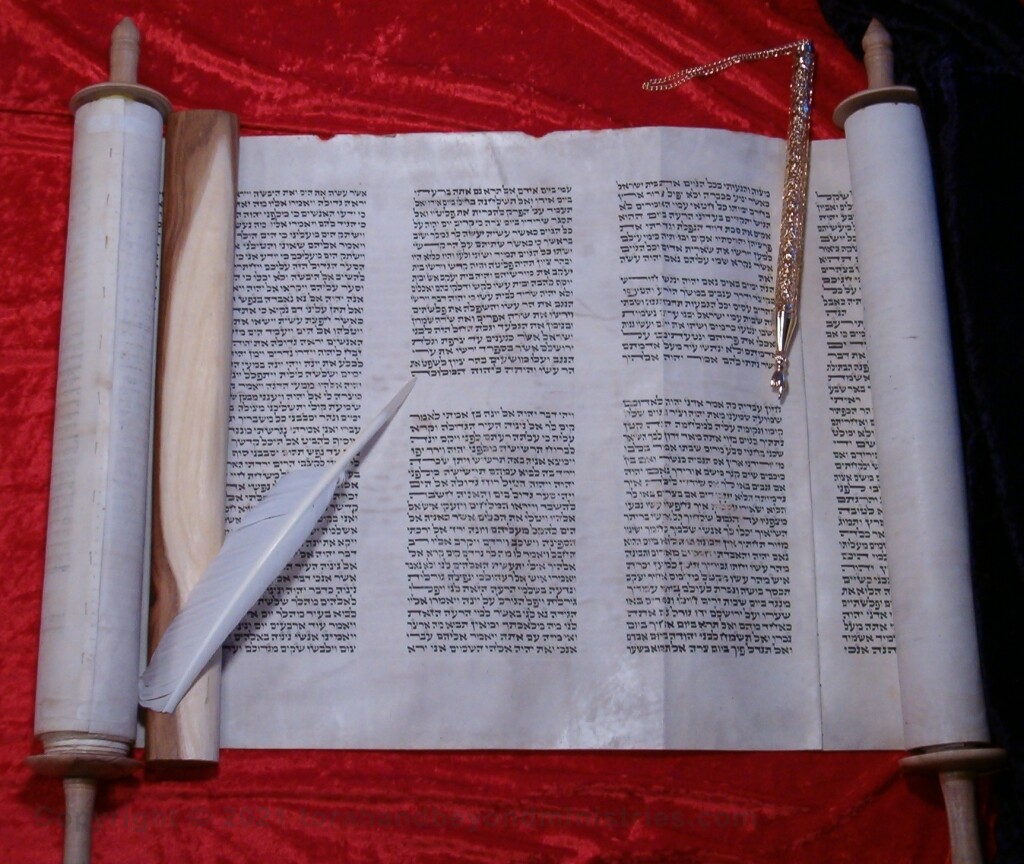 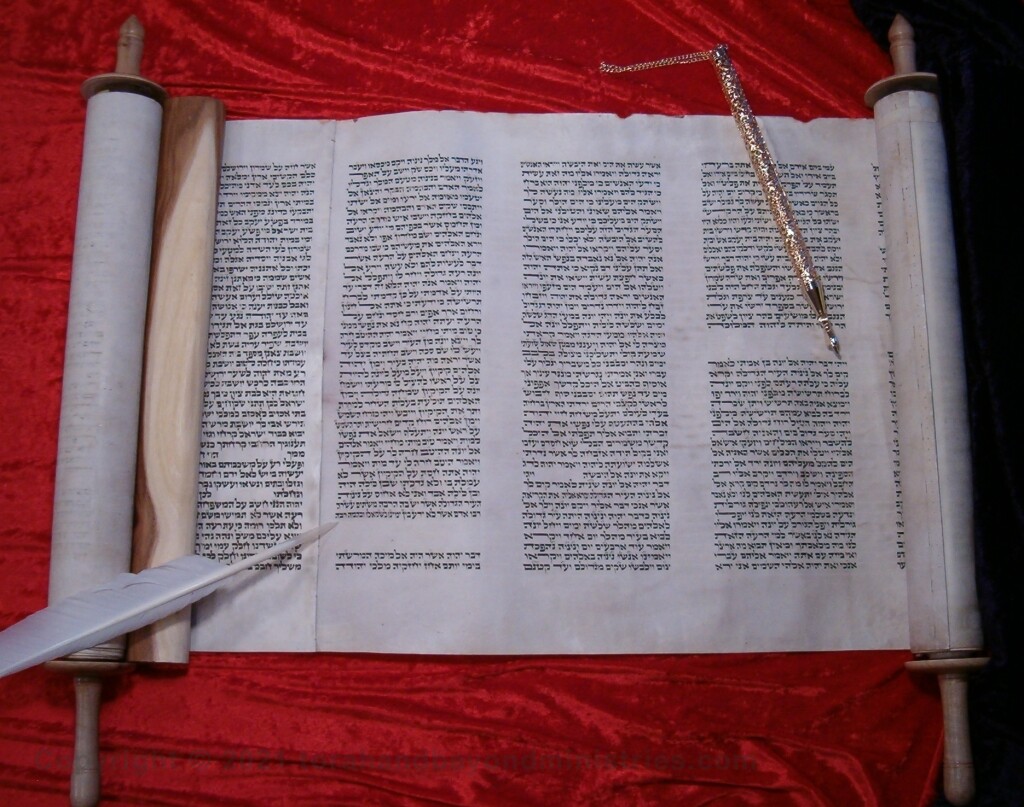 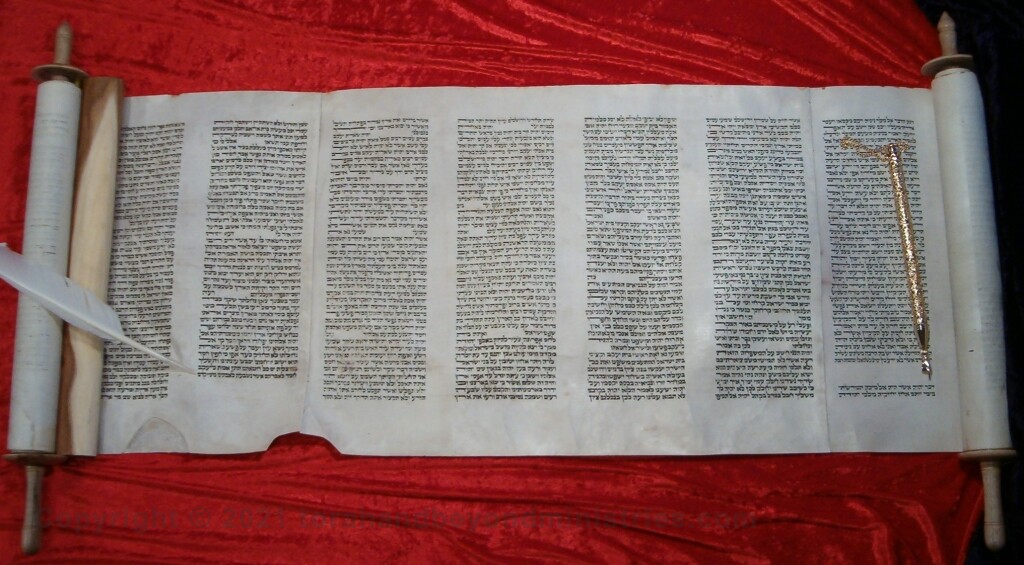 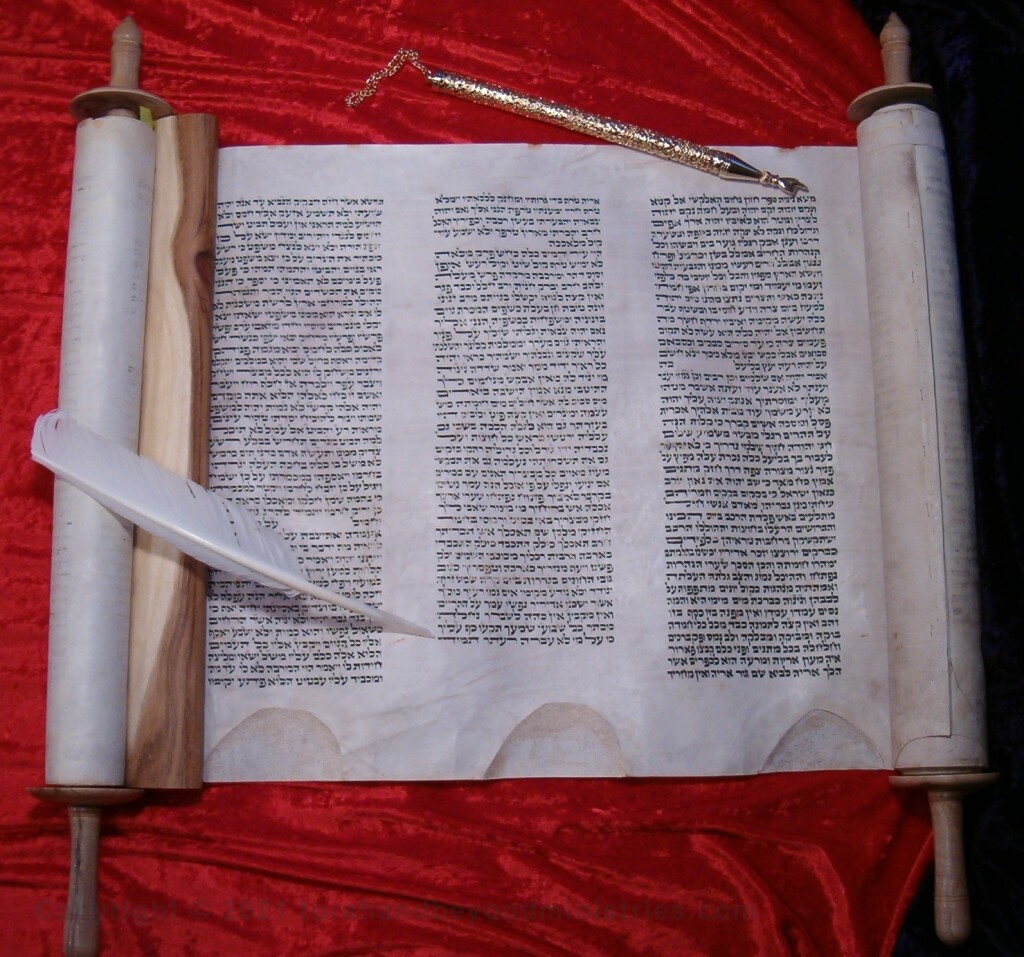 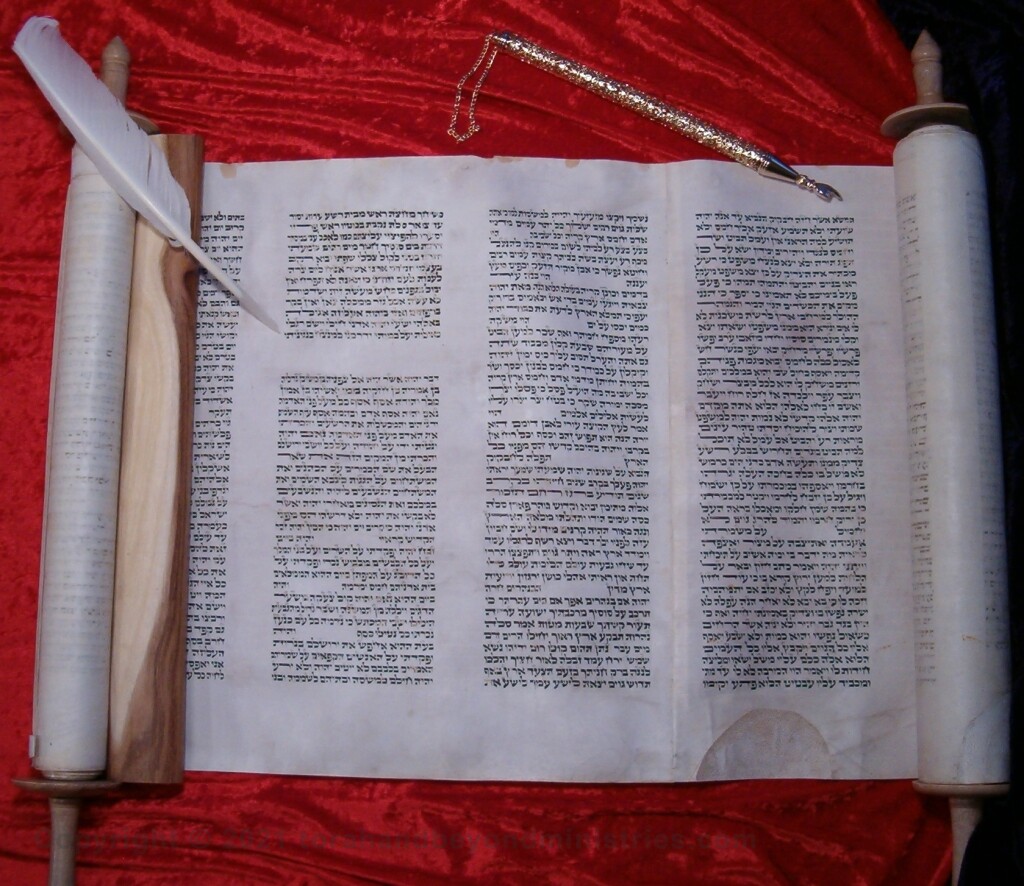 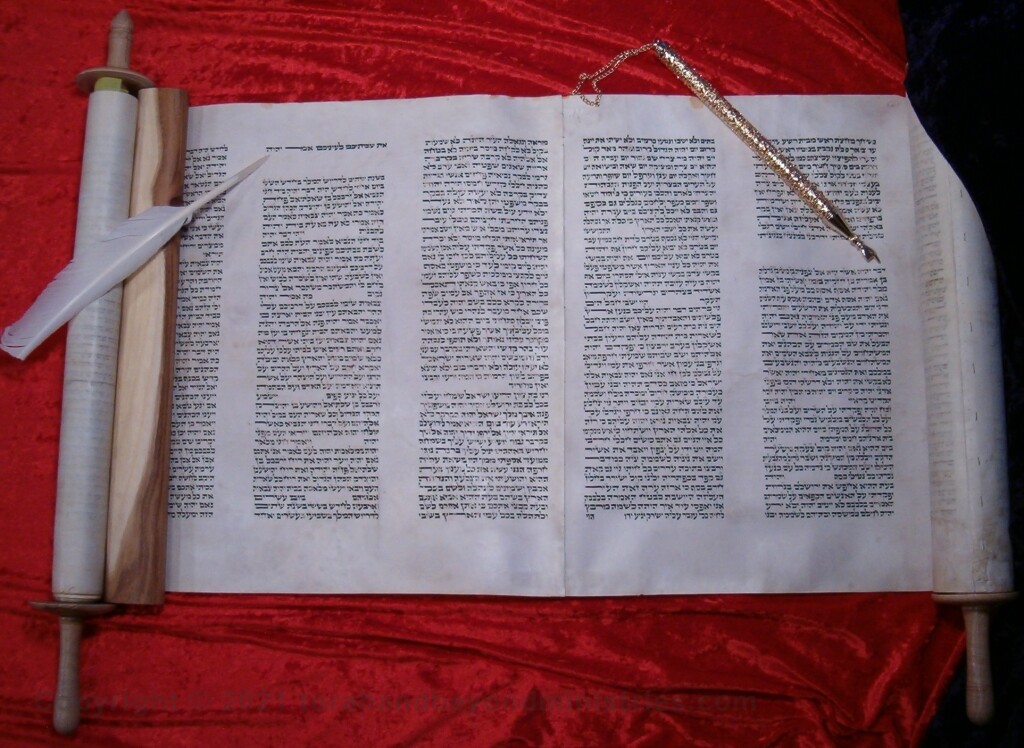 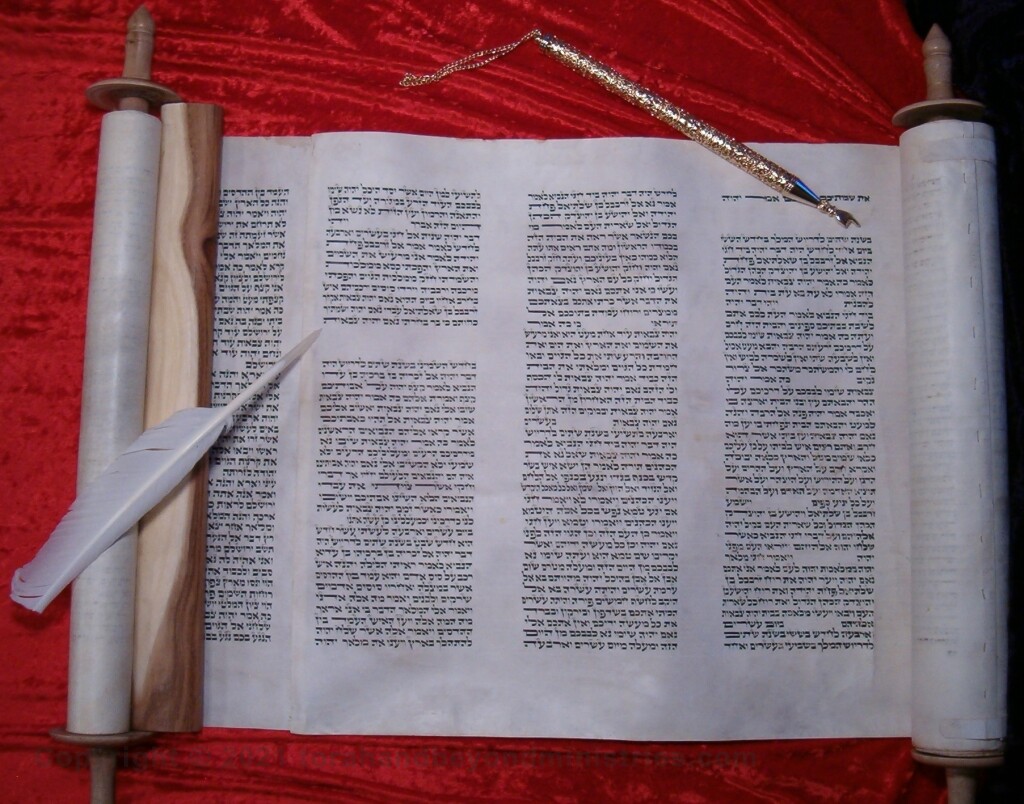 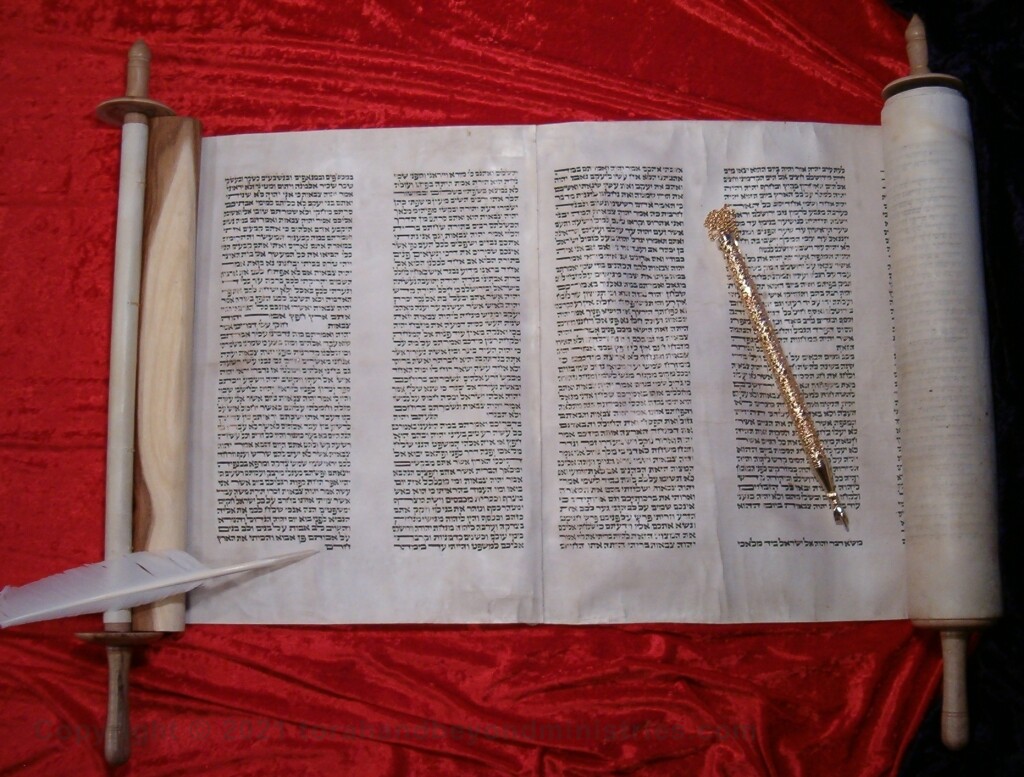 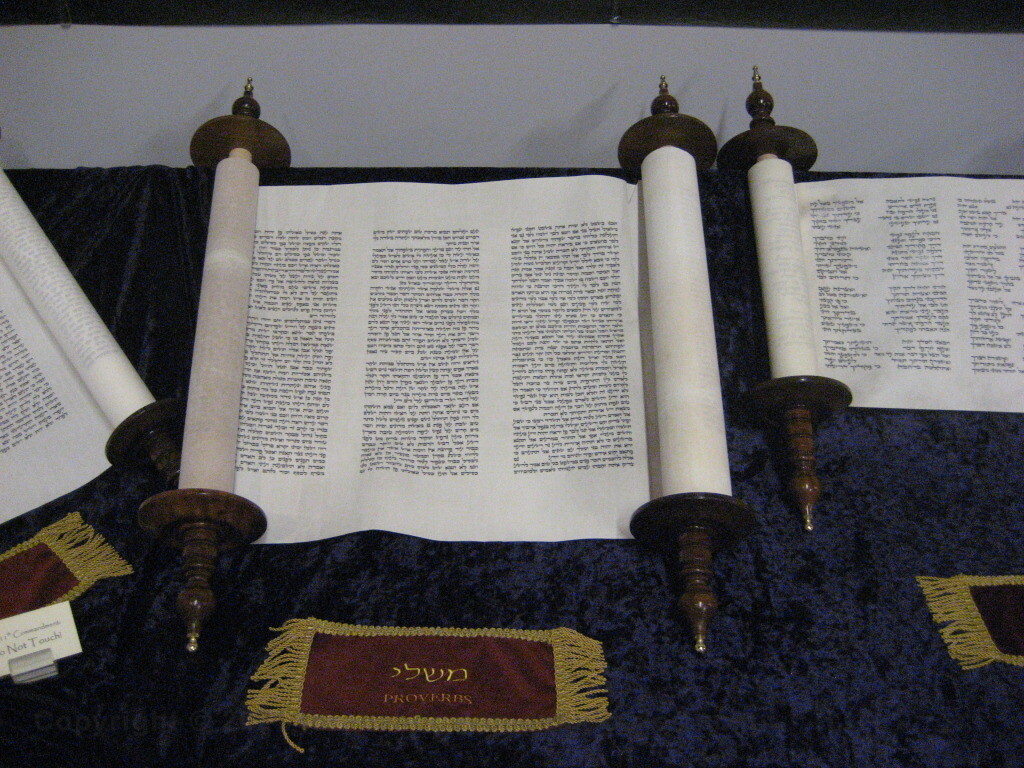 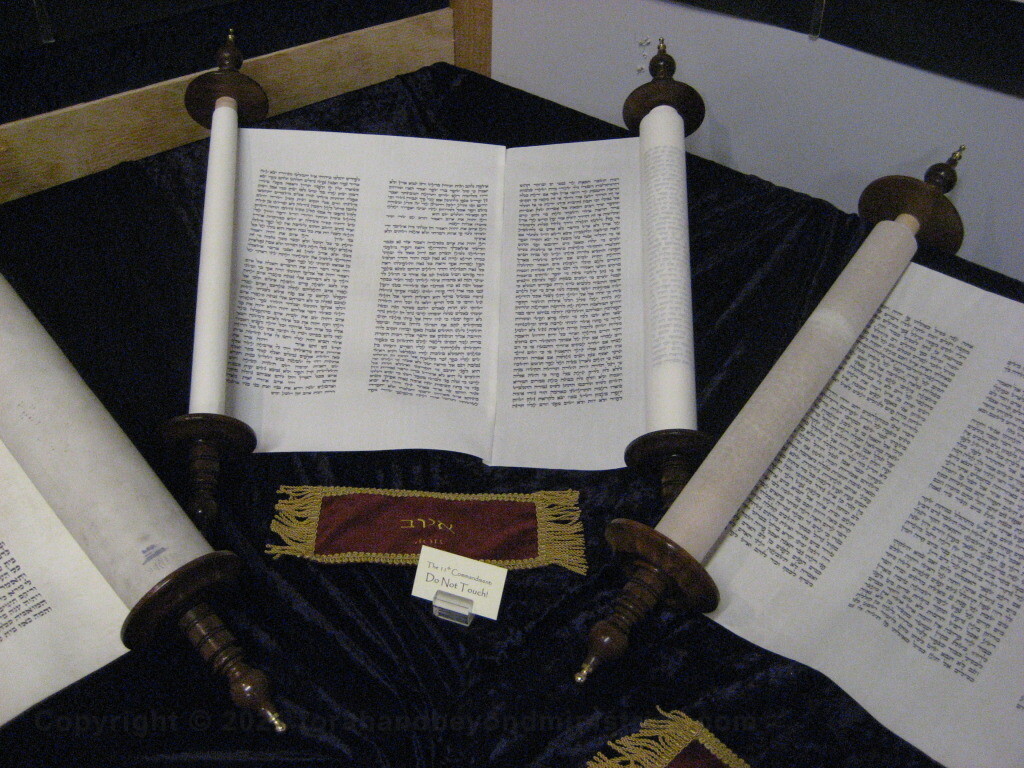 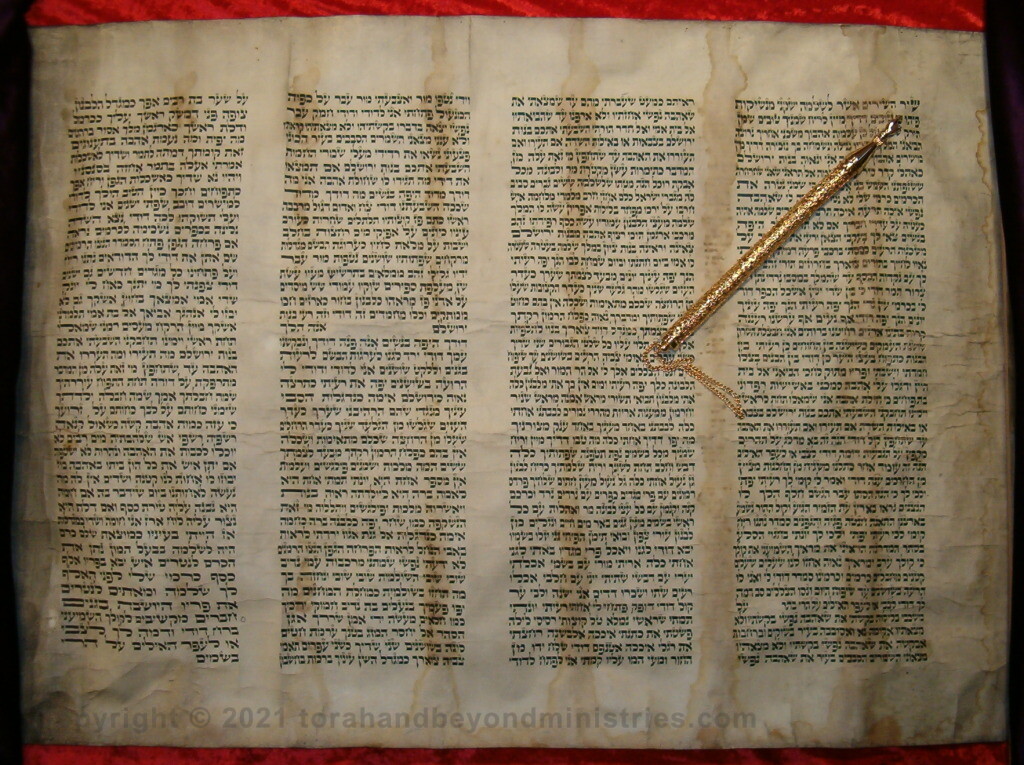 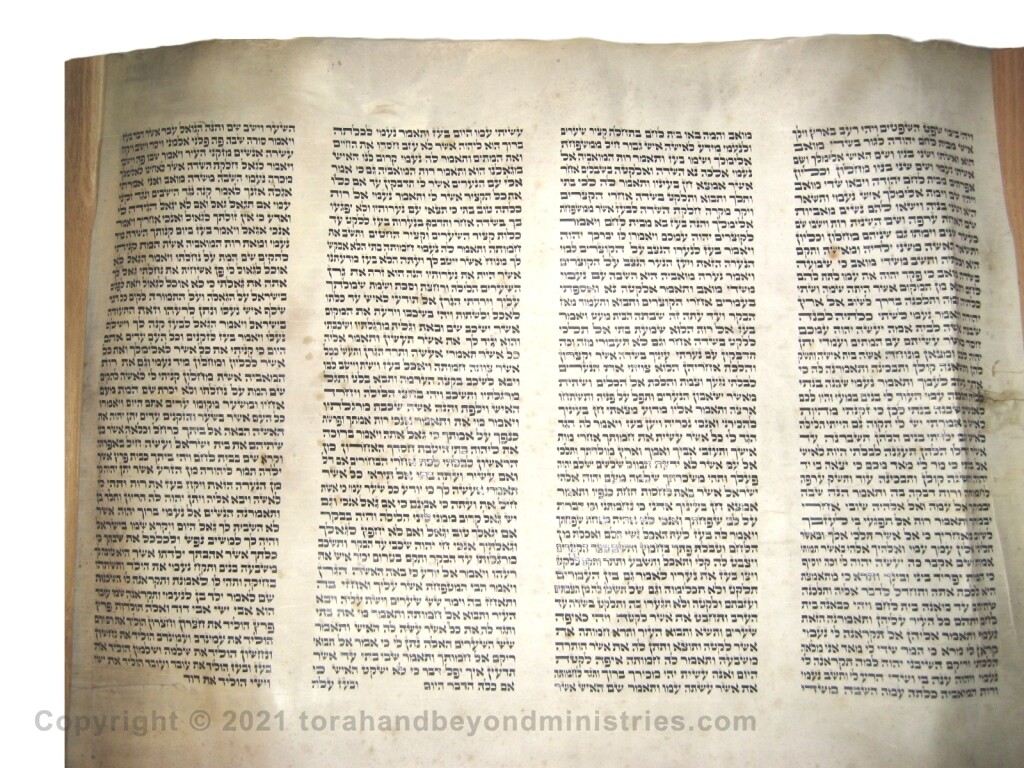 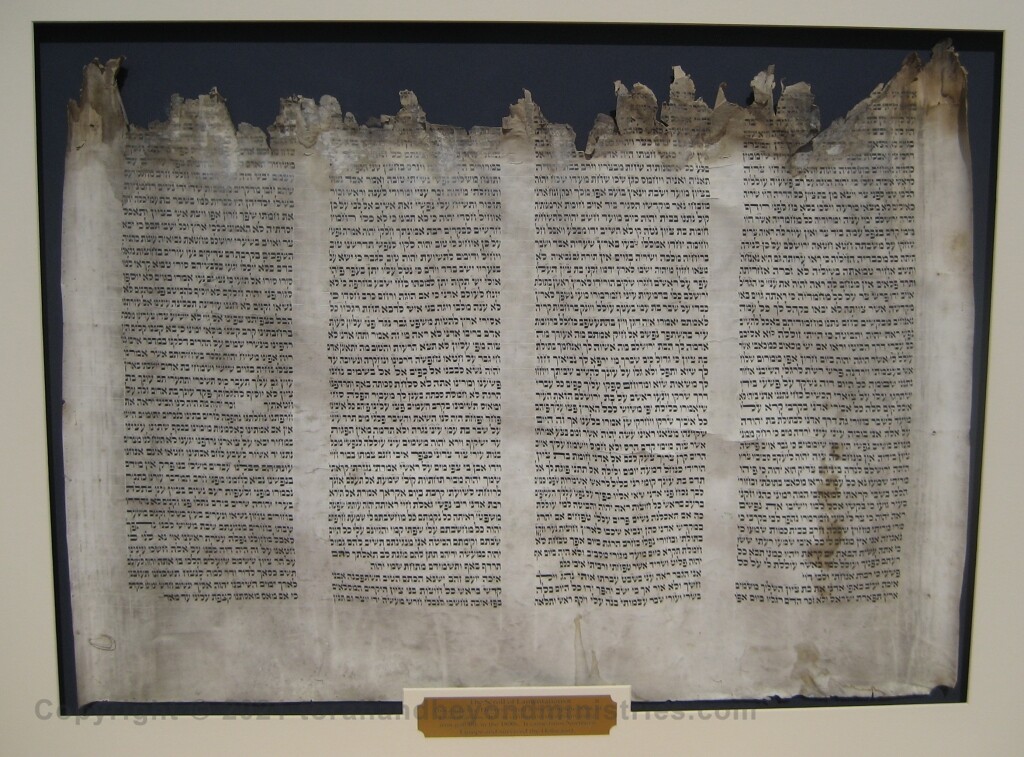 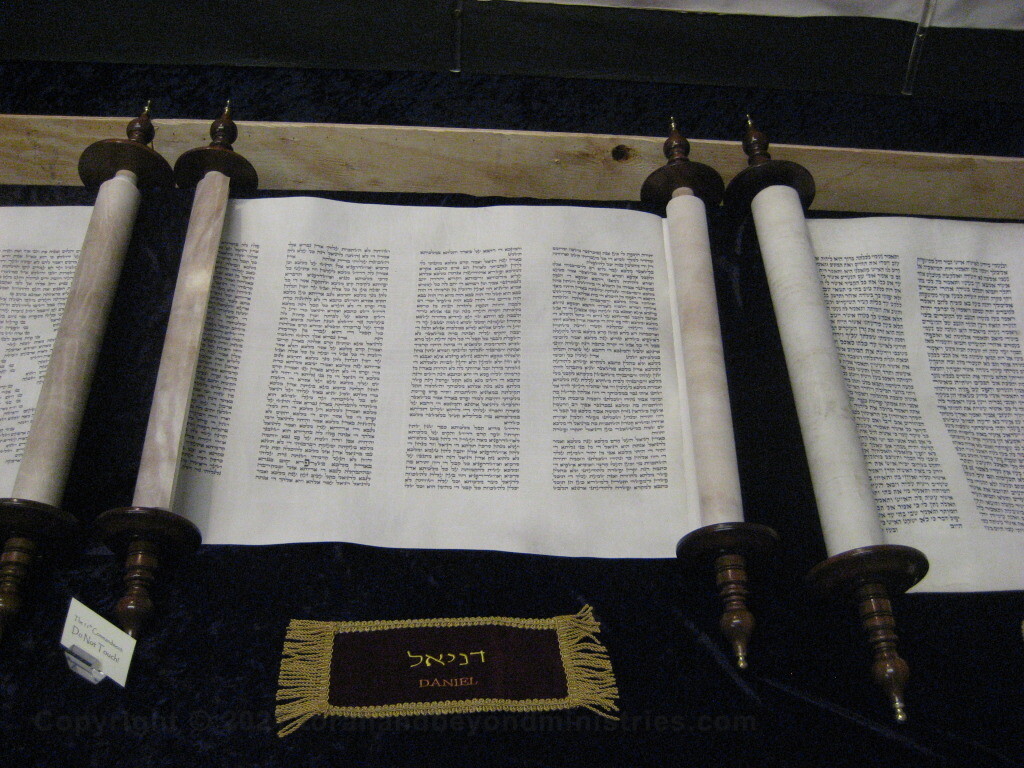 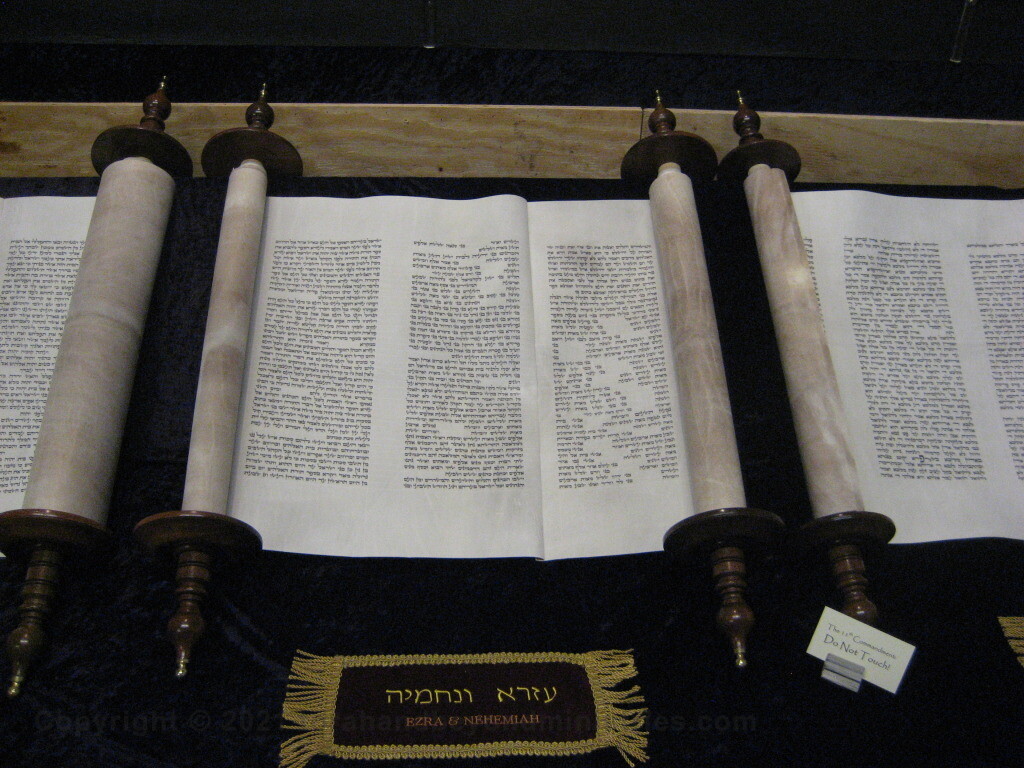 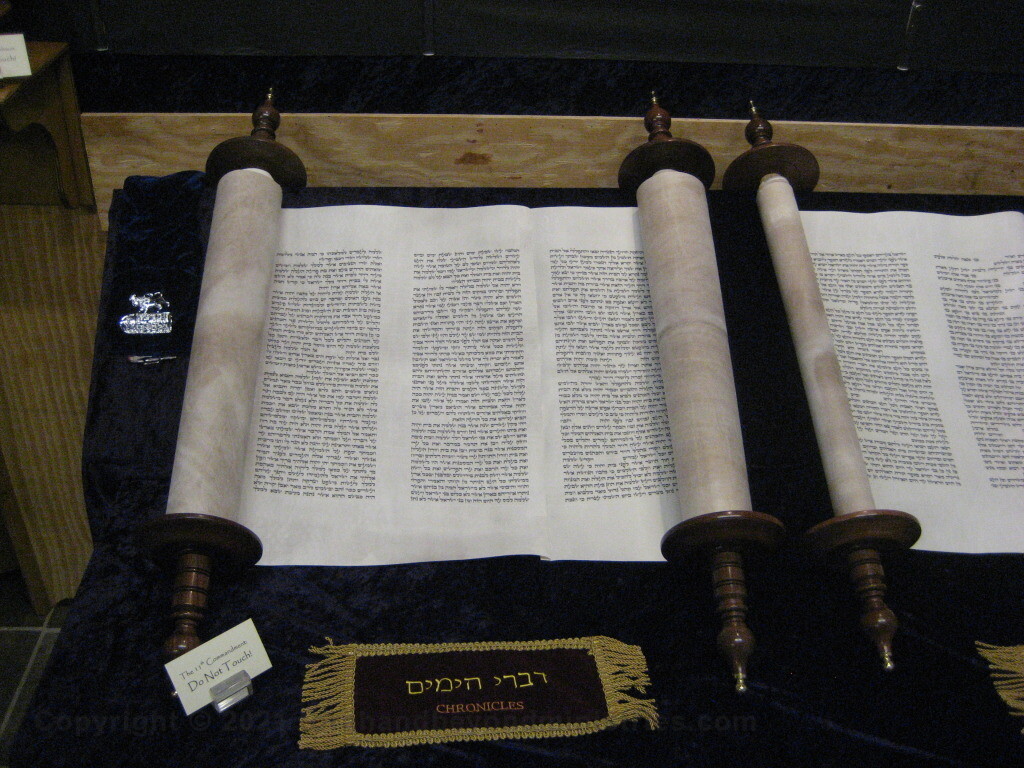 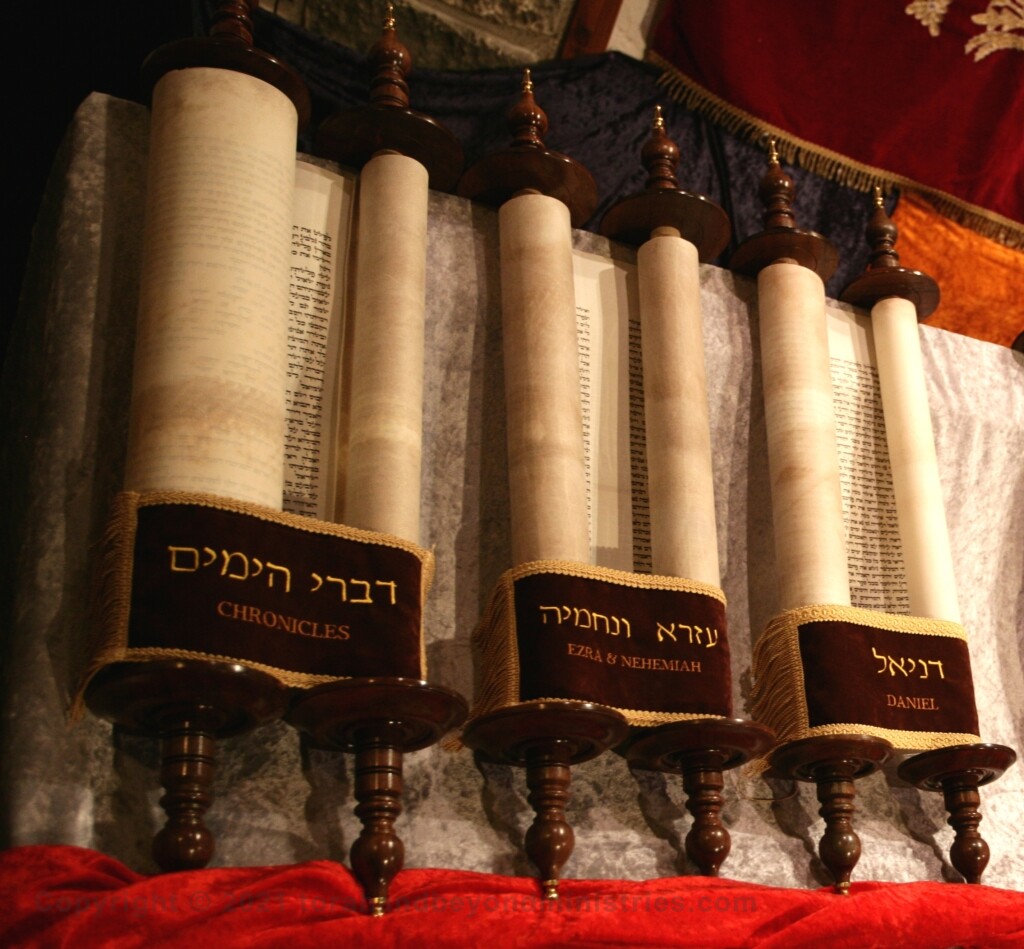